Circle History:
During the school year 1946-47, Mrs. Anna Newton and Mrs. Sara(h) Wood convened a group of 8th and 9th grade girls from the Lochhaven section of Norfolk at the home of Mrs. Newton's sister, Mrs. Barron Black.  The purpose of the meeting was to form a junior Circle to work for the King's Daughters' Children's Hospital, as CHKD was then called.  The Circle would function under the guidance of Mrs. Wood, Mrs. Newton, and their Circle.

At that time, Circles could be named for people, and the Circle elected to call itself Ruth Sargeant Circle, for a visiting nurse at King's Daughter's with whom Mrs. Wood and her Circle had worked.

Each Thursday afternoon, the girls went to the hospital's location on York Street to hold bottles for the babies, change diapers, and play with the young ones.  A major project was making trays for patients in the hospital for each and every holiday.  Each girl was awarded a small silver cross which was then the symbol of Circle membership.

When the girls finished high school and went off to college, the Circle disbanded.  It was reformed as an Adult Circle in 1955. 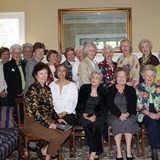